Owing chiefly to the fact that the Cherokee still occupy western North Carolina,
the existing local legends for that section are more numerous than for all the rest
of their ancient territory. For the more important legends see the stories: Agân-
unitsi’s Search for the Uktena, Atagâ′hĭ, Hemp-carrier, Herbert’s Spring,
Kăna′sta, The Great Leech of Tlanusi′yĭ, The Great Yellow-jacket, The
Nûñnĕ′hĭ, The Raid on Tĭkwali′tsĭ, The Removed Townhouses, The Spirit
Defenders of Nĭkwăsĭ′, The Uwʼtsûñ′ta, Tsulʻkălû′, Tsuwe′năhĭ, The Uʻtlûñ′ta.
A KWĔ ʻ TI ′ YĬ : A spot on Tuckasegee river, in Jackson county, between Dick’s
creek and the upper end of Cowee tunnel. According to tradition there was a
dangerous water monster in the river there. The meaning of the name is lost. 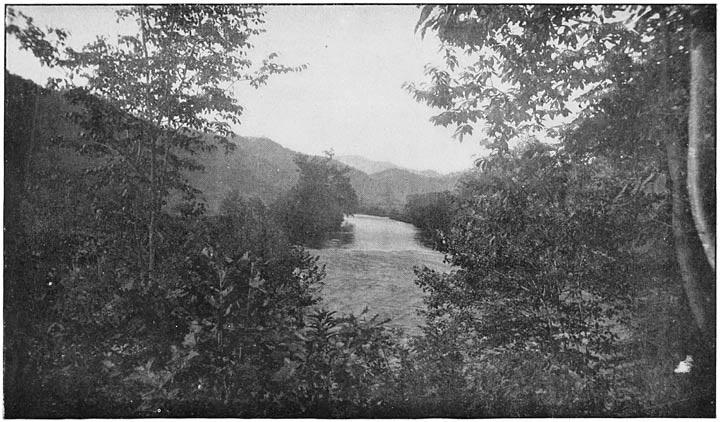 A TSI ′ LA – WA ′ Ĭ : “Fire’s relative,” a peak, sometimes spoken of as Rattlesnake knob,
east of Oconaluftee river and about 2 miles northeast of Cherokee or Yellow
Hill, in Swain county. So called from a tradition that a ball of fire was once seen
to fly through the air from the direction of Highlands, in Macon county, andalight upon this mountain. The Indians believe it to have been an ulûñsûtĭ (see
number 50), which its owner had kept in a hiding place upon the summit, from
which, after his death, it issued nightly to search for him.
B LACK ROCK : A very high bald peak toward the head of Scott’s creek, northeast
of Webster, on the line of Jackson and Haywood counties. Either this peak or the
adjacent Jones knob, of equal height, is known to the Cherokee as Ûñ′wădâ-
tsuʻgilasûñ′, “Where the storehouse was taken off,” from a large flat rock,
supported four other rocks, so as to resemble a storehouse (ûñwădâ′lĭ) raised
on poles, which was formerly in prominent view upon the summit until thrown
down lightning some fifty years ago.